Herr Kolonel Heinz Von Kuntz and his sturm truppen had set a firm hold in the area, and work on his secret underground base had already begun. The cannibal denizens had been massacred or been repelled to nearby caves, and their village would be a perfect cover for his installation.

"Herr Kolonel! Some intruders were spotted nearby in the jungle! And... It looks like Rico Andrews is leading the party."

"Wunderbar" Von Kuntz thought. "I'm going to handle this personally, and get rid of that scum forever".

Exploration is a good all-rounder scenario which can be used to act out plenty of situations and is a good start for a campaign - basically, several parties of adventurers are compelled to explore and dominate an area. Movement is the key to all Golgo Island scenarios - nothing's more boring than a stand and shoot game. In Exploration, the victory conditions are the following :

What's a Twist, by the way?

In rules terms, a Twist is a game help that counterbalances a Hero's skills ; in story terms, it is what the scenario writer uses to make the story and the characters exciting. It is the Pulp factor implying that the toughest heroes will have to beat the hell out of countless enemies, while the wimps providing comic relief will always survive the direst situation thanks to their supernatural luck. In other words, the better your character, the lower his Twist value, and the more difficult his mission.

In this scenario, the twists that were selected were Initiative and Creature Magnet. Initiative affects the usual WarEngine initiative rules, as figures with a high twist value will be more likely to play first. Creature Magnet allows players whose Heroes have a high Twist value greater chances to activate Non Player Figures.

2 factions consist in "official" Golgo Island figures, and comprise 3 units of one 70pts heroes each : we'll call them the Heroes of Justice and the Champions of Freedom. The profiles used for them are those that can be found in the Golgo Island wiki.

A third faction, the Fiendish Nazis, was made up of some of Bob Murch's lovely Pulp Figures. As the others, it comprised 3 units: two heroes, and a group of troops. As no profile existed for those, the player created some using the WarEngine, following the guidances that can be found on the Wiki. Von Kuntz (represented by the Steel Mask figure) is an interesting case of profile creation, by the way. To stick to the character the figure represents, and his weaponry (a submachine gun, which is rather point-expensive in the hands of a skilled shooter) we were bound to give him excellent attack, defence and leadership stats. That made him cost too many points for this game, even with the lowest Twist value, as we wanted all units to be worth 70pts. We therefore applied some flaws, which would flesh out his character (Glory Hound seemed to fit him perfectly), reflect the bad luck that affects all villains in the most critical situations (Hard Luck) and cut his cost down to 70pts. 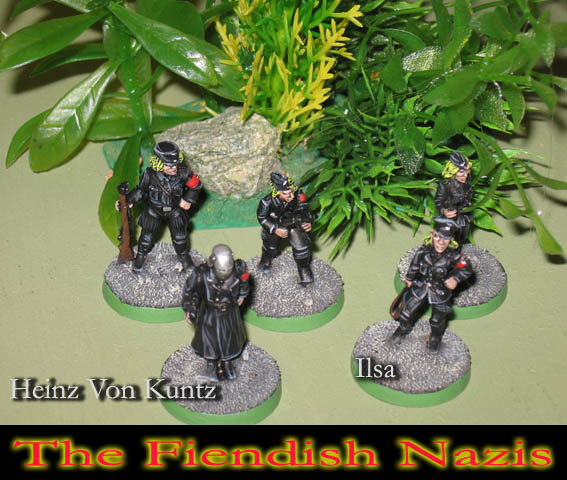 The game was played on a 36"x 48" table, which was way more than necessary, as forces were deployed in a 24"-sided triangle.

Seven markers were equitably laid on the game area as well as 4 pieces of terrain representing the caves from which the hungry cannibals would spring out for fresh meat: 1 in the middle, 3 between each faction.

We decided to use 2 "random events": every time a marker would be picked up, a player would draw a card from a pre-arranged deck containing 2 jokers. The red one would give the figure that picked it an extra Hero Point, the black one would give it the opportunity to place a giant spider in contact with a piece of terrain, and activate it immediately. 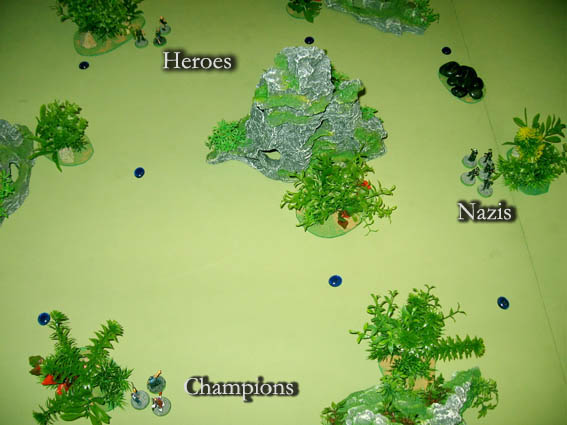 All characters (except the Diaper Avenger, who was very busy doing things) rushed to be the first to reach the positions that would ensure them domination over the area. The first cannibals showed up in front of Thor Pasadenas, who broke their neck without breaking a sweat. 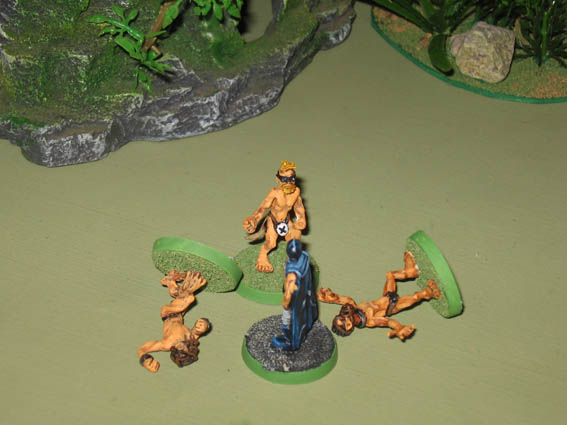 The mighty Luchador had to fight them under a hail of bullet from Rico Andrews - another cannibal died from the shots in the melee, but Thor stood unhurt. More cannibals got out in front of the evil nazis, whose troops shot them down with grins of sadistic pleasure. Von Kuntz, confident in his capability of handling both the hungry savages and Gunther, the opposing Hero challenging his domination of the area, ran to the objective while Ilsa and her troops went the other way. 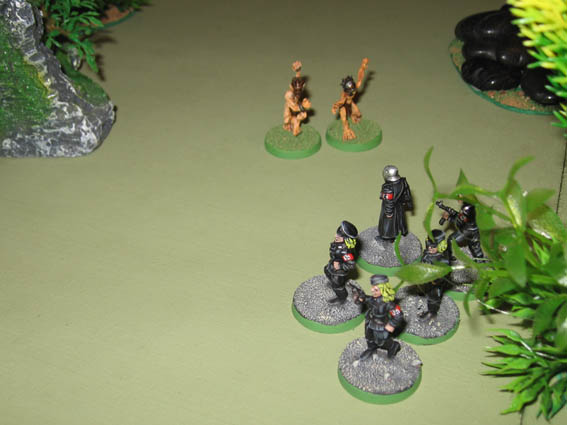 Still heading to the objective points (or busy doing the same things), the heroes wanted to be the first to reach their respective goals - this is when initiative became of paramount importance. Gunther had the opportunity to pop out of cover and reach the objective - but to do so, he had to withstand gunfire from Von Kuntz (who played last that turn, but had reserved an MP40 attack the turn before). Fortunately for Gunther, the nazi's submachine gun was jammed (an effect of the Hard Luck flaw), and he could go back to the safety of his cover. Walter Kotchev unloaded his weapon on a cannibal charging Rico Andrews. 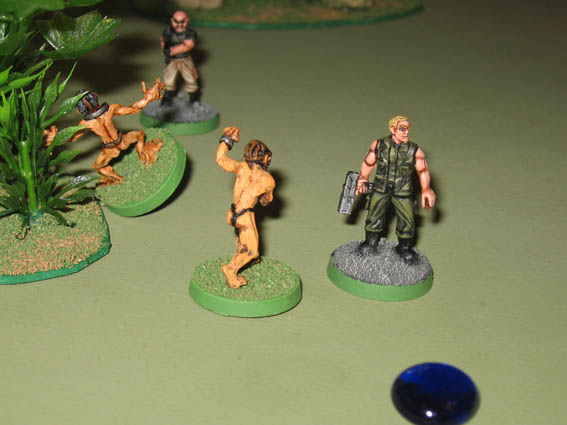 As he was reloading, Thor Pasadenas decided to boldly charge the sergeant and kick the crap out of him ; the soldier's expertise in martial arts was no match for the famous Luchador, who had defeated single-handedly the most fearful opponents. 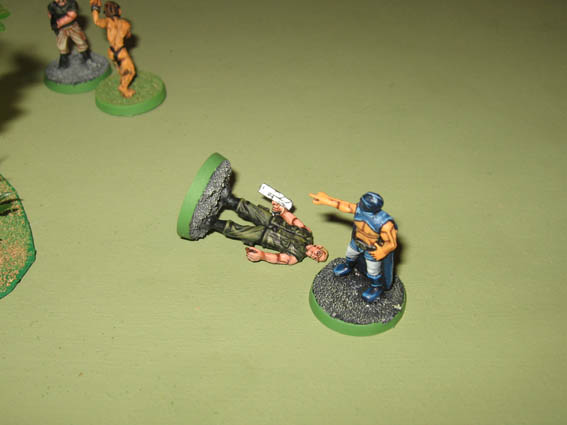 (Walter Kotchev used his reserved attack -the one he didn't use in turn 1- on the charging cannibal; as both he and Andrews had used their ranged attack, Thor could pop out of cover without risking to be shot at). At the other end of the area, two cannibals rushed out of their caves and attacked Von Kuntz - quite unexpectedly, the hungry savages managed to knock him down and dragged his body to their caves to feast upon his entrails. 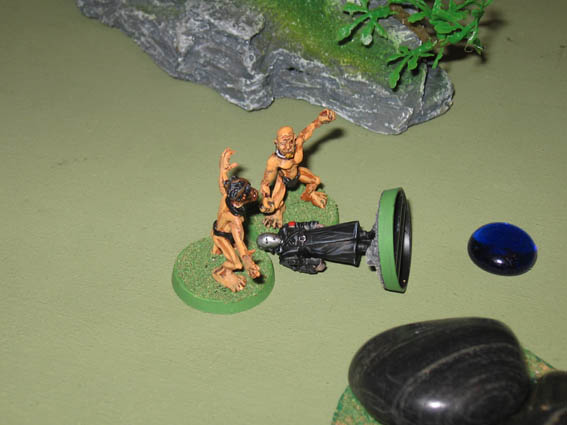 (That was a rather well done and lucky activation from Thor Pasadenas, who, after defeating Rico in hand to hand, rolled a 10 on his Twist, thus allowing the player to activate 2 savages. Even by massing their attacks, those were quite unlikely to do a Hero, especially a tough one like Von Kuntz, any harm. But sometimes, things just go plain wrong At this point of the game, Thor and his companions had met the victory conditions: they had reached 3 key positions first, killed 2 savages -thereby scoring 11pts- and the other parties had both lost one member. But) Walter Kotchev spat on a snake's head, and grabbed his SMG: it was time to kick butt. Shoving aside the cannibal who was attacking him, he unloaded his weapon in Thor Pasadenas' forehead, which left the wrestler unconscious. 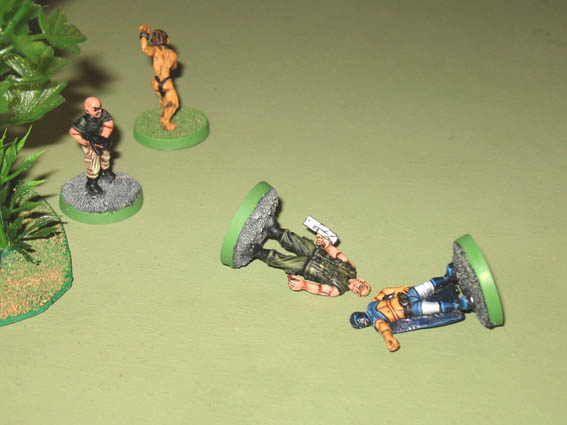 Ilsa and her She-Wolves were ambushed by a group of savages - two elite storm troops were killed by the fierce cavemen. Ilsa retaliated, and tamed very violently the first brute in her path with her whip, beheading him on the spot in a torrent of blood. 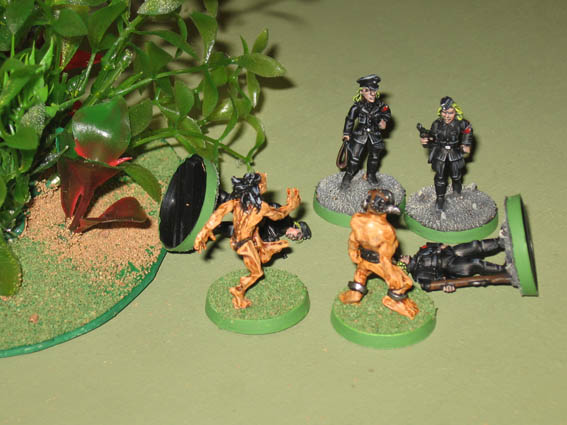 When she proceeded to her objective, I was only to notice that some lunatic in a sailor suit had been there already: she immediately blew his brains out with a well-aimed shot of her Lüger. 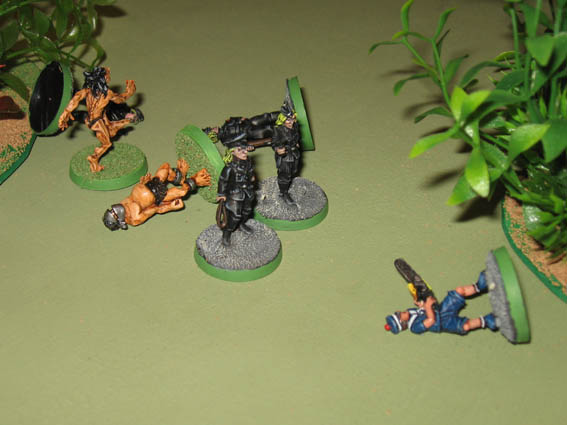 Was it the obviousness of that dead-end situation that disturbed him, or the effect of his appalling stupidity? For the third turn in a row, the Diaper Avenger stood immobile, gazing at the distance with drool on his lips.

(The Diaper Avenger is afflicted by the flaw Dumb, giving him a 50% chance of losing all his actions for the turn, except his Twist roll).

Gunther was assaulted from behind by two cannibals ; one of them bit his ear off, which left our hero unconscious. 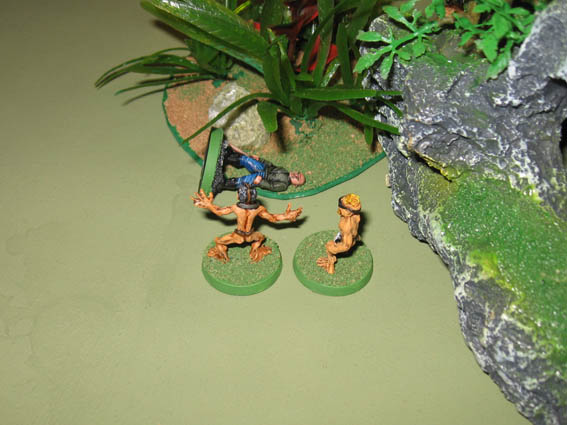 Seeing the scene from the distance, Walter Kotchev once again fired his submachine gun, killing one of the primitives on the spot. 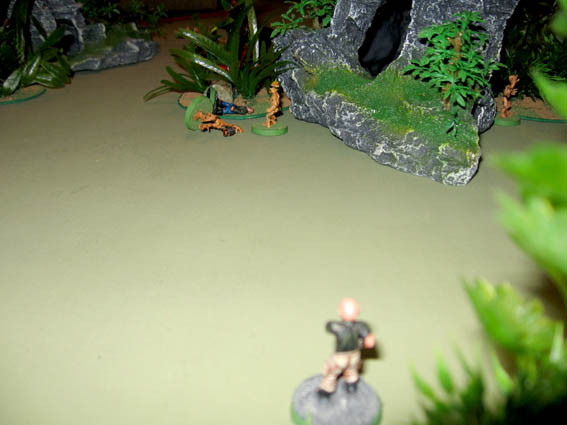 Ilsa had to shoot her last She-Wolf in the back of the head, as she was about to flee and further dishonour her elite corp. She then proceeded back to another area, confident that it was still possible to secure it and at least prevent the damned adventurer wannabes from reaching their secret camp.

And from the caves, cannibals were still rushing out to bring their inbred children their daily human meat

When he felt that pain in his leg, the Diaper Avenger suddenly realised something was happening. There was a funny naked guy biting him, and another one reaching for his neck. It didn't take him too long to realise that was wrong; he broke the skull of one of the savages with his crowbar and ran away. 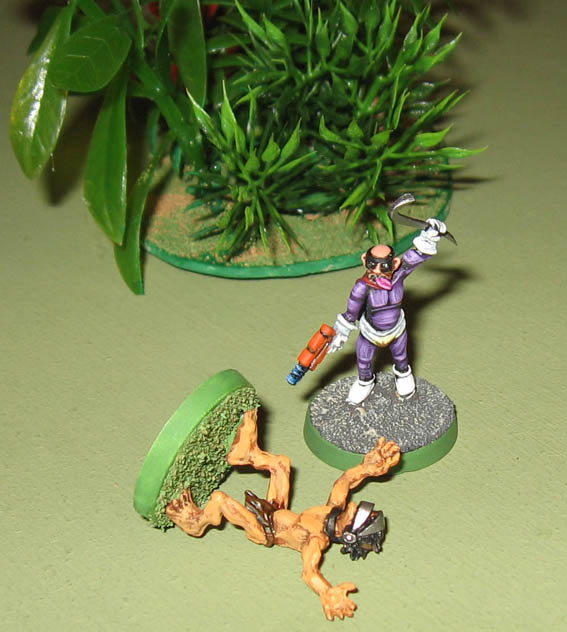 Meanwhile, Walter Kotchev was on a killing spree and shot down yet another savage "You're messing with the wrong guy, you bloody primitive scum with no culture and clothes!".

As he uttered these words, a huge spider emerged in his back from the nearby bushes. 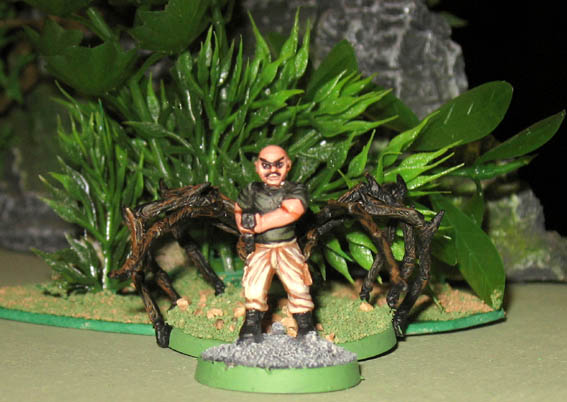 (Ilsa had picked the 6th marker and drew the black joker. At this point, all the remaining Heroes were far from the last marker, far from each other, and had very close scores - to win the game, they had to increase their body count to ensure the most solid hold over their area)

"What is it you want, you darned insect? Is that what you want? Well, take that, you freaking bug!" Kotchev roared, as he stomped on the spider's head with his massive leather boot. 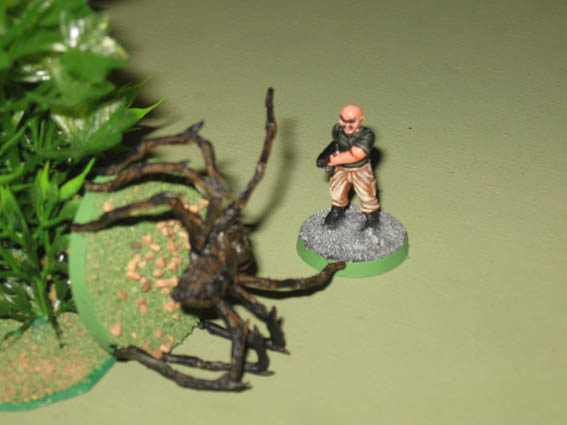 Then, he turned around and resumed his extermination of all savages in line of sight.

Meanwhile, the Diaper Avenger was still on the run - and though the guy with the moustache couldn't see and shoot him anymore, there was still one of those funny people in beach clothes on his heels. He pressed the trigger of his pistol and a warm, acre (and rather unpleasantly smelly) fluid reached the open mouth of the yelling savage, causing him great disturbance. 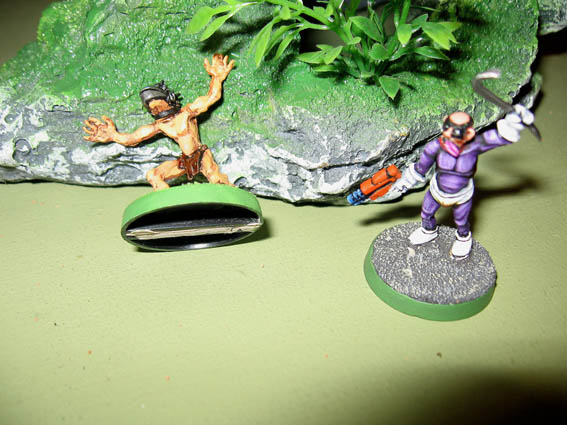 Ilsa was determined to clear the area of all savages, by the whip and by the Lüger. All the more so as the primitives kept running out of their caves, visibly extremely hungry for her appetising flesh. 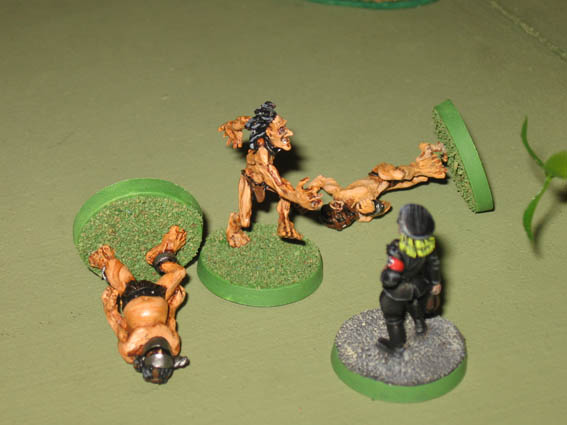 As more of them once again bit the dust, the tribesmen's primitive mind eventually concluded that those strange men with boomsticks were of a dangerous kind and they'd be better off eating their own brethren.

At the end of the turn, the Heroes of Justice emerged close victors as they scored a total of 14pts, while both the Champions of Freedom and the Fiendish Nazis scored 13.

Walter Kotchev was on a rampage, and swore revenge on all those treacherous traitors who attacked them by surprise. Rico Andrews was badly hurt, but drinking a little water would certainly soothe the pain of his broken neck.

Ilsa wasn't less furious - men always are such a disappointment to her. She had to start an expedition to rescue Von Kuntz, though. The high command doesn't appreciate it when its most decorated officers end up as kebabs in a dirty wet cave.

The Diaper Avenger, as for him, felt very happy. Very very happy. When Thor recovers from his wound, he would certainly tell him if it was the right reaction.

The game was a really minor victory; actually it was more like a draw, so our scenario conclusion had to reflect this for the next game.

The players agreed that Kotchev and Ilsa had shown particular heroism, surviving countless perils and killing more than their share of savages - they would play the next game with an extra Hero Point, for free.

As it was the Heroes of Justice who nonetheless won the game, it was decided that they would have a bonus to all their Twist rolls during the first turn of the next game, to represent their slightly better control and knowledge of the area.